by Tina Gerhardt
in (REAL) NEWS

Last week, at the UN climate negotiations, the International Energy Agency announced that pledges made thus far could hold warming to 1.8 or 1.9C. Yet an investigation published on Sunday by The Washington Post found that countries' pledges are based on faulty data. And a report released on Tuesday by Climate Action Tracker, a research group that monitors action on greenhouse gas emissions reductions, found that the targets will, at best, keep temperatures to 2.7C (5F). That same day, the United Nations Environmental Programme (UNEP) published its annual Emissions Gap report, which matched the Climate Action Tracker's findings: current pledges will lead to 2.7C.

The Climate Action Tracker based their conclusions on the Nationally Determined Contributions (NDCs) that each country released before the talks. The NDCs, which are publicly available on the United Nations Framework Convention on Climate Change (UNFCCC) website, spell out how each country plans to cut greenhouse gas emissions. The plans range from specific to vague, and from extremely short to hundreds of pages. Under the Paris Agreement, which was adopted at COP21 in Paris in 2015 and went into effect in 2016, each country needs to submit its NDC every five years.

Because of the sheer volume of countries involved, the Climate Action Tracker focused on the 40 countries that are responsible for 80 percent of the world's emissions, and ranked their plans based on how likely they are to result in the necessary cuts. 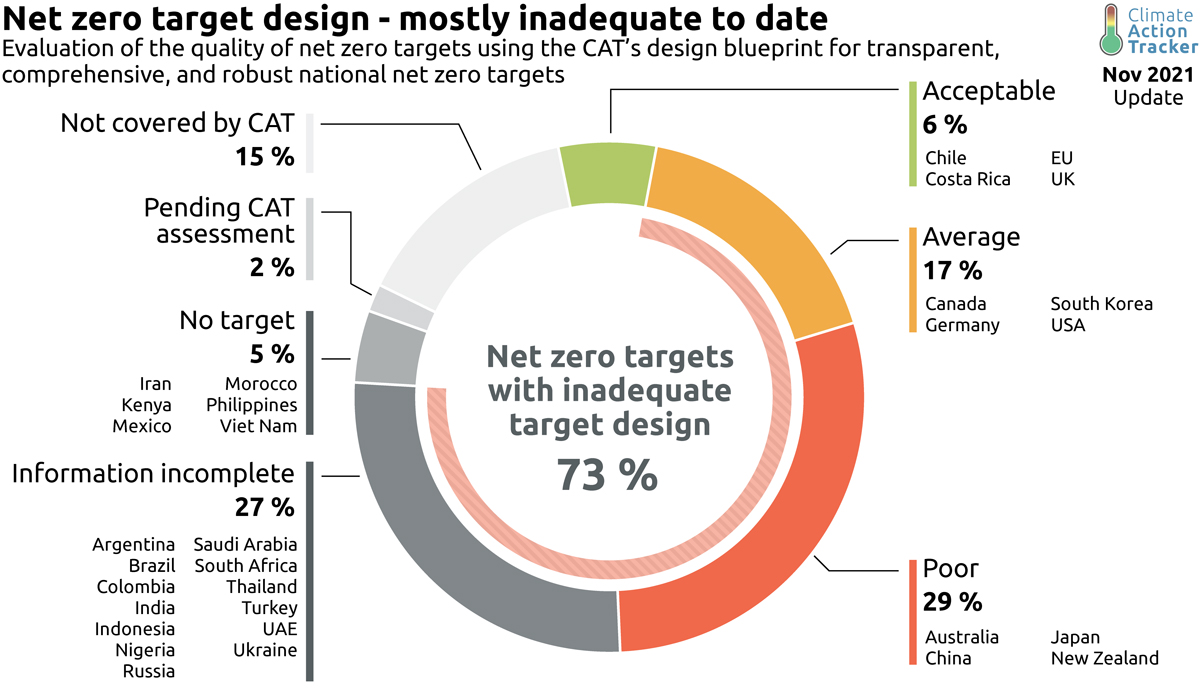 Only four negotiating partiesChile, Costa Rica, the European Union, and the United Kingdomhad plans that CAT found acceptable for holding warming to the Glasgow talks' stated goal of holding warming to 1.5C (or "1.5 to stay alive" as negotiators from island nations say).

The reason these countries have managed to delude themselves and others? Instead of laying out concrete plans to drastically cut emissions immediately, during the next crucial two decades, some countries plan to cut their emissions only minimally, and balance what is left by doing things like buying carbon offsets, planting trees, and investing in carbon capture technology. Instead of cutting their greenhouse gas emissions to zero, they would reach something they call "net zero."

The simple phrase that begat a legion of creative accounting

When countries promise that they can reach net zero without making sharp cuts to emissions in the next decade, those claims should not be taken at face value. The commitments are too far into the future and action is needed now. Reliable, quantifiable methods of carbon capture and sequestration do not exist yet at the scale necessary to help meet those targets. A country could embark on a massive reforestation project, only to see those forests decimated by wildfires or illegal logging. They could invest in carbon capture technology that fails to pan out. They could restore wetlands, only to see them thrashed by climate change-intensified hurricanes. A coal plant can be shut down in a day, while a forest takes decades to grow.

Furthermore, many net zero schemes rely on carbon markets, offset schemes, and using lands in the global south as carbon sinksa tactic that might mean forced removal of the people currently living on them. The use of lands as carbon sinks is referred to as "nature-based solutions." Sara Shaw, climate justice and energy programme coordinator at Friends of the Earth International said, it "rings alarm bells. Clearly, it's an intoxicating idea, that after decades of inaction nature can come to save us from climate breakdown. But 'Nature Based Solutions' will likely lead to land grabs, food insecurity and rights violations for people already on the sharp edge of climate impacts."

There simply is not enough land and trees in the world to soak up the emissions of big polluters and northern governments. For these reasons, organizations ranging from Friends of the Earth to Indigenous Environmental Network, from Power Shift Africa to the Third World Network and many others, are calling for "Real Solutions Not 'Net Zero," and satirists like Australia's The Juice are directly mocking net zero as a fantasy.

As Meena Raman, from the environmental group Friends of the Earth Malaysia, said at a press briefing last week, "Offsetting is no longer a solution. It has to be real zero. And it should have been real zero yesterday."

Another problem is how many countries are planning on reducing their emissions in the next decades, rather than this one. The greenhouse gas emissions cuts that nations have laid out in their NDCs fall into two categories: short-term (by 2030); and long-term (by 2050 for developed nations and by 2060 for developing nations).

What matters most is that these short-term emissions cuts are made this decade. But most of last week's good news was based on long-term commitments, which gives the nations making those pledges over a decade before they can be held accountable for failing to meet their emissions goals.

At a press briefing, Professor Niklas Hhne, of the NewClimate Institute, one of the two organizations who put out the Climate Action Tracker report, said "We now have more than 140 governments announcing net zero targets that cover more than 90 percent of global greenhouse emissions. And at first sight, that's positive news. If we then assume that all of these countries indeed meet their net zero targets, then we calculate a temperature increase by the end of the century of 1.8 degrees."

That, said Hhne, is the optimistic scenario. But it is not a likely one. "It's not time to sit back and relax," he added. "Because not a single country has short-term policies in place to put itself on track towards its own net zero targets. Right now, the net zero targets are a good vision but they have to be backed by short-term action otherwise, otherwise they are simply not credible. And that's also where this COP has moved only a small step forward. We still have a huge gap. Assuming all countries implement everything they have proposed here, we would still emit twice as much as we should in 2030 compared to if we want to be on a 1.5 pathway."

If one takes into account only the short-term targets that the nations participating in COP26 have made for 2030, temperatures would rise by 2.4 C. If one looks at their existing (not promised) policies and actions, temperatures will increase to 2.7C. "All countries have to go back and rethink what they can do," Hhne said. "And the only way to do that is to go into emergency mode. Governments have to do something substantially different."

Given this urgency, developing nations are calling for NDCs to be reported every year instead of every five years, a demand that was included in the draft text published on Wednesday morning, and to develop even more ambitious short-term actions. "The key issue for us is not net zero targets in 2050 particularly for the rich world," said Meena Raman. "Net zero by 2050 is too little, too late, particularly for the rich world."

On Tuesday morning, at a press conference held by the Republic of the Marshall Islands, Tina Stege, Climate Envoy for the Marshall Islands expressed similar sentiments: "I think we need to see folks coming back on commitments in 2022. For these things to have impact and make sense you have to start next year. The decade of action is now."

More than just a COP problem

This use of the term "net zero" to delay action is not unique to COP 26. A report from Corporate Accountability published last month and titled "The Big Con: How Polluters Are Advancing a 'Net Zero' Climate Agenda to Delay, Deceive and Deny," found that Microsoft, for example, has based its plan to reach net zero by 2030 on a still-unproven carbon capture technology.

But it is especially critical at the UN climate negotiations because of its capacity to block what nations in the developing world are calling for instead: ambitious short-term commitments backed by action and the phase out of fossil fuels. Yesterday's draft of the COP26's final decision text mentioned fossil fuels for the first time with a demand to "accelerate the phase out of coal and subsidies for fossil fuels."

Jennifer Morgan, Executive Director of Greenpeace International, said: "What's very concerning here in Glasgow is that the first draft of the climate pact text is already exceptionally weak. Usually the text starts with some ambition, which then gets watered down. To keep 1.5 alive, four words must be added: 'fossil fuels phase out,' and countries must come back next year to close the gap."

Tina Stege, Climate Envoy for the Marshall Islands, too, stated that concrete, near-term action was the only viable solution to the climate crisis. "We can't just have promises of what we're going to do; we actually have to have actions to back them up," Stege said. "As we laid out, on policies like phasing out coal, policies on methane, ending of fossil fuel subsidies, these are the concrete actions that need to happen now."

The One Parenting Decision That Really Matters