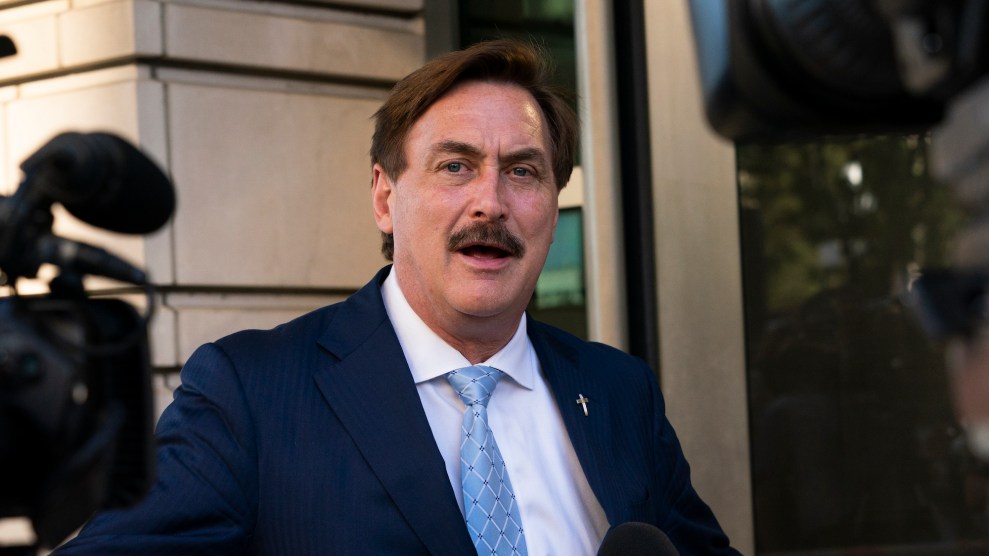 Last week, tornados tore through Kentucky, leaving 200 miles of death and destruction. At least 80 people were killed, and 15,000 structures damaged or destroyed. The storm is estimated to have caused nearly $4 billion in damage. But not to worry citizens of Kentucky. Mike Lindell is on the case! The founder of the MyPillow empire—and a MAGA world luminary—says he’s donating 10,000 pillows to Kentucky tornado victims. Those lucky souls may not have a house or a job, but they will now have pillows that Costco won’t sell anymore.

And other right wing provocateurs are also getting in on the action:

As Mike Lindell goes all out to help the tornado victims in Kentucky, let’s go all out to help him. Big discounts of up to 66% if you go to https://t.co/83houproSq and use promo code DINESH pic.twitter.com/QyWHuXx8aL

Lindell has donated pillows in the past, especially to religious charities like the Salvation Army. This latest gesture has provided an opportunity to further promote his company as he struggles under a mountain of legal bills stemming from a $1.3 billion defamation lawsuit filed against him by Dominion Voting Systems for suggesting the company manipulated the 2020 presidential election results. Lindell was a primary funder of the “stop the steal” rallies after the election, and he participated in spreading lies and conspiracy theories about voting fraud. The House committee investigating the January 6 insurrection is also seeking communications between the Trump White House and Lindell. This fall, Lindell reportedly sold his personal jet to finance the mounting legal fees.

The cash crunch doesn’t seem to be slowing down his election crusade. Lindell recently said he has spent $25 million so far pushing the Big Lie that the 2020 election was stolen from Donald Trump. He told CNBC Wednesday that he will “spend whatever it takes” to prove that Trump should be president and to restore integrity to the election system. “I will keep spending it because there is no tomorrow. We lose our country… I will spend every dime I have,”

He is reportedly an “angel investor” in a new effort to send volunteers out door-to-door to supposedly root out election fraud by interrogating people about how they voted and trying to suss out whether their ballots were “legitimate.” Some election officials are concerned that the canvassing may be crossing over into voter intimidation.

In the meantime, supporters like Dinesh D’Souza and Russia probe figure George Papadopoulos (both pardoned by Trump for criminal offenses), are encouraging people to buy those pillows—for the tornado victims, of course.