Sarah Palin Will Get a COVID Vaccine “Over My Dead Body” 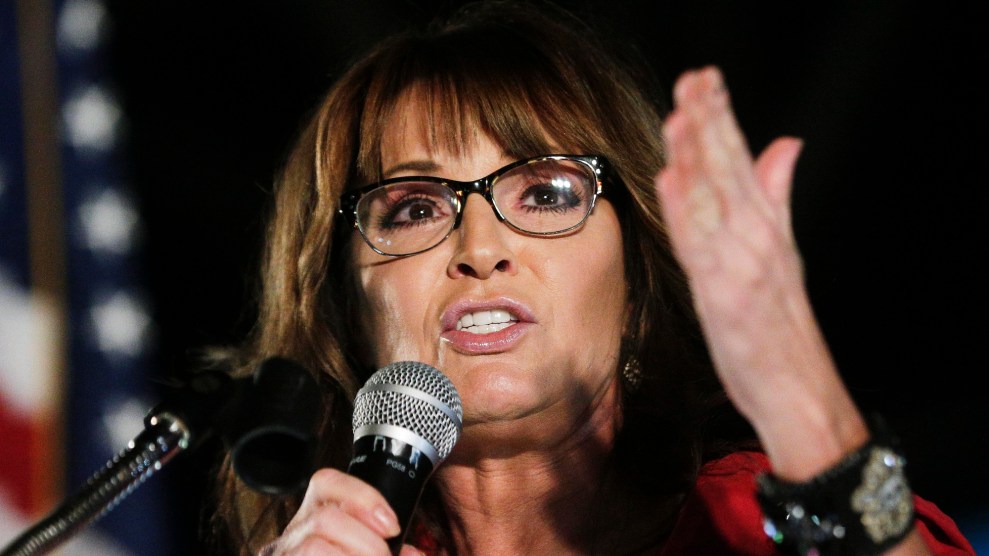 It’s been a while since Sarah Palin has headlined a major political confab, what with time taken up by her busy reality TV schedule, appearing, as she has recently, as a psychedelic teddy bear on “The Masked Singer.”  But this weekend, the former GOP vice presidential candidate and Alaska governor graced the stage of the Turning Point USA “AmericaFest2021” conference in Phoenix. Now a grande dame of the MAGA world, Palin treated the gathered conservative youth to her inimical political commentary and media bashing, while reminding us that the blazing idiocy on display in the Republican Party these days did not start with Donald Trump.

Chatting on stage with Turning Point founder Charlie Kirk about the pandemic and vaccine mandates, Palin said if she had to get a vaccine, “it will be over my dead body.”

Sarah Palin showed up in Phoenix this morning to tell that crowd “it will be over my dead body” that she gets vaccinated. Then she encourages others to “stiffen their spines” and fight back. “There is an empowerment in a group like this where we can kind of feed off each other.” pic.twitter.com/t47oxxrGtB

Palin’s unintentionally tone deaf (and somewhat hilarious) comment about the vaccine, which has, of course, prevented the deaths of many people around the world, marked a significant change from her comments in late March this year, when Palin, her daughter, and 12-year-old son Trig, who has Down syndrome, all contracted COVID. After suffering through the illness, she urged people to take the virus seriously and to wear marks. “I view wearing that cumbersome mask indoors in a crowd as not only allowing the newfound luxury of being incognito, but trust it’s better than doing nothing to slow the spread,” Palin told People at the time, noting that her father had just gotten his second vaccine dose. “I’m more concerned about him and his peers, and this beautiful older generation’s health and quality of life should be a national focus and priority,” she said.

But these days, not even Donald Trump can tell conservatives to get vaccinated without getting booed. Palin dutifully toed the line with Kirk when she spoke before the crowd of thousands of (probably) under-vaccinated young people not wearing masks, urging the kids to “stiffen your spine” to resist mandates. “There is an empowerment in a group like this where we can kind of feed off each other and really be strong,” she said.

Palin joined an all-star conference lineup of some of the dumbest people in American politics who have her trailblazing career to thank for theirs, including Donald Trump Jr., Rep. Marjorie Taylor Greene (R-Fla.) and Rep. Lauren Boebert (R-CO). “I’m not vaccinated,” Greene told the Turning Point crowd. “And they’re going to have a hell of a time if they want to hold me down and give me a vaccine.”

Marge Greene today: “I’m not vaccinated. And they’re going to have a hell of a time if they want to hold me down and give me a vaccine.” pic.twitter.com/xvX4QD2zOI

The Trumps Must Comply With Subpoenas, Judge Rules