Time for a Climate Insurgency?

by Jeremy Brecher
in (REAL) NEWS

Since the end of the feudal era the world order has been largely structured by the nation-state system. Individuals have been willing to kill and die for their countries. The pursuit of individual and collective interests has occurred largely within a national framework.

Insurgencies are social movements, but movements of a special type: they reject current rulers' claims to legitimate authority. 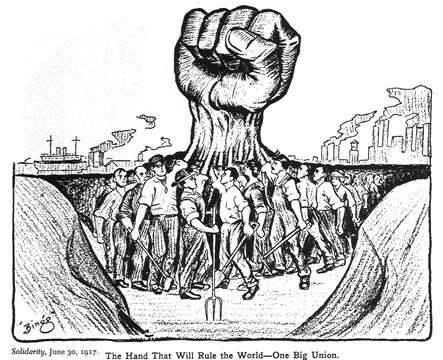 Each of these examples illustrates the globalization of human solidarity. Why, despite the dominance of the nation-state framework, do movements arise in which solidarity transgresses nation-state boundaries?

In a world where "self-preservation" is often regarded as "the first law of life," solidarity is a form of action in which mutual aid serves as the means for realizing individual interests. Solidarity is the practice of pursuing individual ends by realizing mutual and common ends.

Solidarity and common preservation are likely to emerge where people discover that they are powerless to realize their ends by themselves, but that they may be able to do so by cooperation with others.

New common preservations and solidarities generally develop when people are presented a common threat or problem that can't be solved by individuals and limited groups. They experience the necessity to build new solidarities that cross national and other boundaries. This doesn't happen automatically, but through an active process of constructing links among people and groups who have been isolated, divided, and even antagonistic.

Such movements have repeatedly transcended national borders and established transnational cooperation, loyalty, and solidarity. But they have not yet transmuted the nations and the nation-state system that prevent global human cooperation to address global problems like climate change, nuclear holocaust, and injustice.

How can nation-states be not only penetrated by global forces, but also have their most destructive aspects metamorphosed by them?

The nation-state system has helped cause and perpetuate climate destruction. National sovereignty gives states the authority to determine what can or cannot be emitted into the atmosphere in their territories; it is states that authorize the emission of climate-destroying greenhouse gas emissions. The sovereignty of nations ensures that common human interests are trumped by the authority of statesallowing governments to destroy the global atmospheric commons without restraint from higher authority or their people. The system of sovereign nation-states generates a competition in which each state must encourage the exploitation of nature's resources or face loss of power and wealth within the competitive world order. The direct and indirect dependence of states and their officials on dominant economic actorsnotably, industries that produce and use fossil fuelsoften makes governments subordinate to those with an interest in perpetuating climate destruction.

To overcome these limitations, the climate movement needs to become what I have called a global nonviolent constitutional insurgency.

Insurgencies are social movements, but movements of a special type: they reject current rulers' claims to legitimate authority. Insurgencies often develop from movements that initially make no such challenge to established authority, but eventually conclude that insurgency is necessary to realize their objectives. To effectively protect the earth's climate and the future of our species, the climate protection movement may well have to become such an insurgency.

A nonviolent insurgency rejects and resists the authority of the state, but it eschews violence. Instead, it exercises power by mobilizing people for various forms of nonviolent mass action that withdraw acquiescence and cooperation from the powers that be.

A constitutional insurgency declares established laws and policies illegitimate and illegal and sets out to establish constitutionally legitimate law through nonviolent self-help. Destruction of the earth's climate represents a violation of the most fundamental constitutional principles; as federal judge Ann Aiken straightforwardly ruled, "the right to a climate system capable of sustaining human life is fundamental to a free and ordered society." If established government won't protect that right, it is up to the people of the world to do so.

Global nonviolent constitutional insurgency is a vehicle for undermining the illegitimate authority of states. Under the public trust doctrine, all people have rights that states, whether their own or others, can't violate. All human beings have valid claims against all states that are destroying a stable climate.

Today, we can see the emergence of climate solidarity all around us. We can see the emergence of new solidaritiesself-preservation transformed to common preservation. But our solidarity is still blocked by a world order based on the war of all against all. One way to overcome our thrust to mutual destruction could be to transform the global climate movement into a global climate insurgency.

The Democrats’ Last Chance to Make Build Back Better Better