by Eamon Whalen
in POLITICS 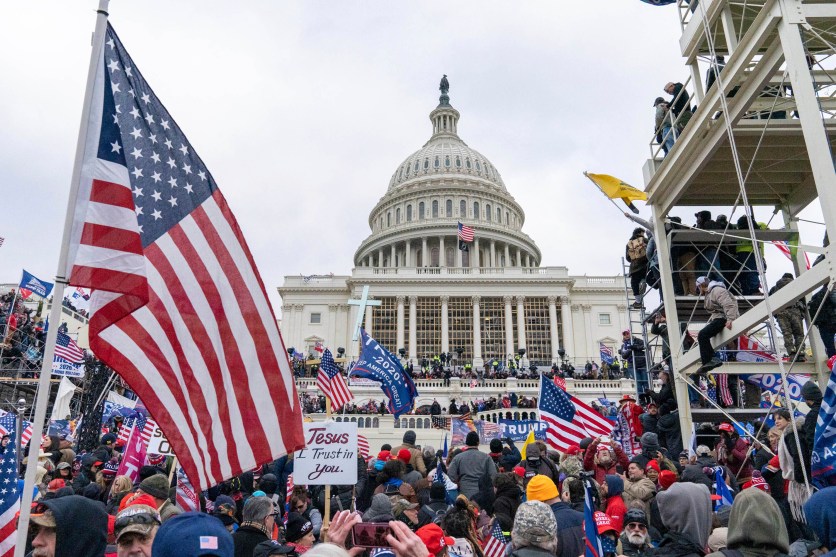 At least six Republicans have promoted a new conspiracy theory that January 6 was incited and directed by an FBI asset. Mihoko Awada/AP

Last Thursday, in a press conference with the Right Side Broadcasting Network outside the United States Capitol on the anniversary of January 6, Reps. Matt Gaetz and Marjorie Taylor Greene spun an increasingly popular conspiracy theory to explain the horrific events that occurred: It was the Feds.

“I’m starting to think this was less of an insurrection and more of a ‘fedsurrection,’” said Gaetz, offering a groan-inducing pun as proof of the seriousness of the allegations.

After months of claiming that rioters were just harmless tourists, or that it was the work of antifa and Black Lives Matter plants, now several Republican members of Congress have pivoted, adopting a spurious claim that it was the FBI, specifically an agent provocateur named Ray Epps. Referred to throughout social media as #FedBoomer or #BigMagaCamo, Epps, these people claim, was a decisive figure in planning, inciting, and directing Trump supporters to storm the Capitol on January 6.

The only problem is the lack of any hard evidence. Ray Epps is a real person. He was at the Capitol on January 6 and has so far not been charged with a crime—that much is true. But there’s nothing to suggest he’s working for the FBI; in fact, public information reveals he’s an Oath Keeper.

Why is Ray Epps free? https://t.co/npsZ1Sz1Re

Who is Ray Epps?

According to the New York Times, the theory began fermenting with a post on the online forum 4chan, as so many do. But the mastermind behind the Ray Epps theory is Darren Beattie, whose writing on January 6 has been repeatedly boosted by Tucker Carlson, and who appeared in the Fox News hosts Patriot Purge documentary. “What the evidence suggests is one of the biggest scandals in American history,” Beattie told Carlson in an appearance on the program on the one-year anniversary of the Capitol riot. (Beattie is a former Trump speechwriter who was fired after it was revealed he appeared on a panel with Peter Brimelow, founder of the white nationalist website VDare.)

So far the “evidence” actually suggests something far from what Beattie describes. While the FBI does have a history of recklessly setting up fake terrorist plots through the use of informants—especially as a tool in the war on terror—”Ray Epps” as FBI agent is at best speculative, and basically totally nonexistent. From all the reporting available, Epps appears to be a cattle rancher in Arizona who went to Washington, DC, like many others, to rally in favor of Trump. As reported in the New York Times and Politifact, it seems like he was one of the many angry members of the small-business owning-class who made their way to Washington. His confirmed connection is not to the federal government; it’s to the the Oath Keepers. In 2011, Epps was listed as Arizona Oath Keeper State Chapter President and appeared in a photograph with Oath Keepers founder Stewart Rhodes. (Epps did not a return a request for comment.)

So, how did this happen?

On October 25, Beattie began to make his argument in a series of tremendously long articles on the website Revolver News, identifying Epps as a “fed-protected provocateur” at the center of a January 6 conspiracy. Beattie asserted that Epps is an FBI asset whose actions were decisive in inciting the violent siege of the Capitol on January 6. Using as evidence that “lawbreaking was 0 for 491 at Trump rallies before January 6,” (which is not remotely true) Beattie reasons that an agent provocateur would be needed to provoke violence out of Trump supporters.

The supposed smoking gun is a series of videos of Epps on the evening of January 5, 2021. In a crowd of Trump supporters, Epps yells that the next day “we need to go into the Capitol, peacefully!” This elicits responses from the crowd (one of whom strongly resembles the troll Baked Alaska) of “Fed! Fed! Fed!” In another video, Beattie’s supposed most-damning evidence, Epps is seen moments before the first perimeter outside the Capitol was breached, cupping his hand and speaking in another man’s ear, who then rushes through the fence. The man turned out to be Ryan Samsel, who was later arrested for assaulting a federal agent.

For Beattie, this is proof that Epps directed the group to breech the fence, laying crucial groundwork for the insurrection that followed. In the video, several other men have clearly already decided to push through as Epps gave his supposedly causal marching orders.

The theory was bolstered in a hearing on October 21, when Rep. Thomas Massie, a Republican from Kentucky, told Attorney General Merrick Garland that “there’s concern that there were agents of the government, or assets of the government present on January 5th and 6th during the protests.” Massie then took out a tablet and played the videos of Epps from January 5 and 6—in which Epps calls out to the crowds that they ought to go the capitol—for Garland.  “As far as we can find this individual has not been charged with anything,” said Massie, who first tweeted about Epps in July. Garland declined to comment, citing the ongoing investigation.

This proves, in the mind of Beattie and other proponents of the Epps theory, that the government is protecting Epps, and that he is an agent or an asset. Beattie’s other evidence that connects Epps to the FBI is that at one time Epps appeared on, and then was removed from, an FBI Capitol Riot Most Wanted list. The gist is simple: Epps has yet to be arrested, that means that he’s an asset. (Of course, it could just as easily mean that Epps was apprehended and questioned by the FBI and is cooperating.)

This idea also requires dispensing with a lot of what is pretty easy to figure out about Ray Epps. He isn’t particularly difficult to find. After the insurrection, he was interviewed by Arizona Central (weird for an FBI agent or asset to do, it seems) where he clarified that he was at the Capitol on January 6.

The videos used against Epps aren’t particularly incriminating either. Perhaps Epps planned to rush the Capitol and then, when it got too serious and real, tried to calm the crowd down. Beattie finds this especially suspicious. It strikes me as understandable. “The only thing that meant,” Epps said of the video of him yelling for people to go inside the capitol to Arizona Central, “is we would go in the doors like everyone else. It was totally, totally wrong the way they went in.” Silly explanation befitting of the Trump-era? Yes. Plausible that once your plan to raid the Capitol got real you backtracked for fear of serious prison time? Yes.

Dismissing every instance of FBI agents embedded in extremist groups is naive. The New York Times has confirmed that the FBI has admitted that there was an informant present at the Capitol riot embedded with the Proud Boys and even texted his handler that day. Meanwhile, in the  attempted kidnapping of Michigan Gov. Gretchen Whitmer, defendants have claimed that they were set-up by an FBI informant, and the FBI claims he was a “double agent.” But in the case of Epps, and January 6 generally, evidence is scant. The theory would mean the FBI supposedly planted an undercover asset who used his real name and was recorded telling people to protest, “peacefully.” Then they posted their asset’s picture on their most wanted list.

If you’re looking for an instigator, there seems to be a more obvious answer. It wasn’t Ray Epps who addressed an audience of thousands and directed them to walk to the Capitol saying, “You’ll never take back our country with weakness. You have to show strength and you have to be strong. We have come to demand that Congress do the right thing and only count the electors who have been lawfully slated, lawfully slated.” It was Donald Trump.

In fact, Trump has taken a liking to the Fedsurrection theory. On Sunday, Trump commended Beattie through a press release. He said, “congratulations to Darren Beattie and Revolver News who have exposed so much of the Fake News false narrative about January 6th.” It continues, “The newly minted term ‘Fedsurrection,’ was even trending!”

There is still much to uncover about why the events of January 6 transpired the way they did. But to assert, based on the available evidence, that the actions of Ray Epps were decisive in orchestrating an event of this magnitude is close to magical thinking, and all too convenient for those looking for a silver bullet to exculpate themselves from their complicity in January 6, the outcome of a months-long assault on the United States democratic process.

The Strangest Ongoing Mystery of January 6

We Should Be Fighting the Climate Emergency, Not Another War