These Youth Activists Are Hunger Striking for Voting Rights, Again 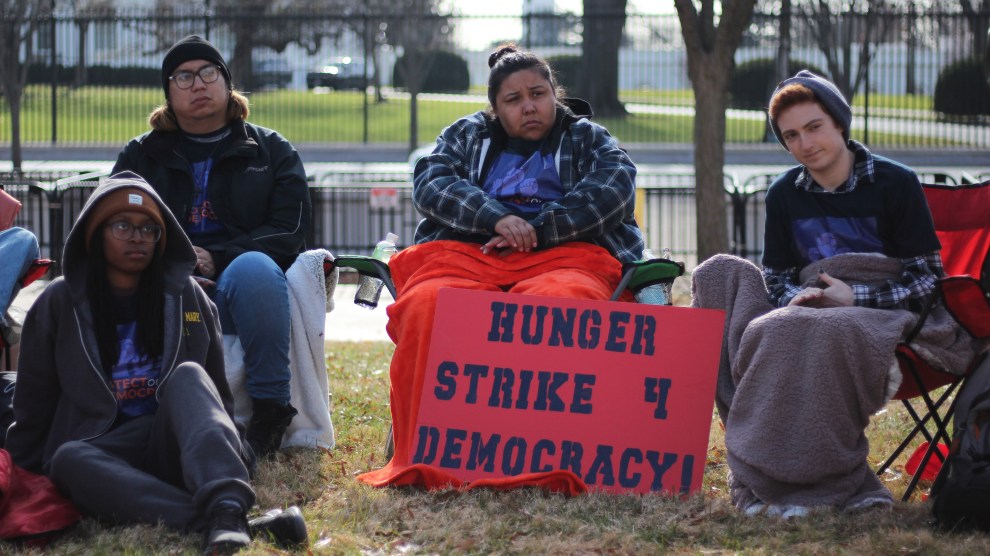 A group of youth activists did not eat for 15 days last month to get Congress to push voting rights reform to the top of its agenda. Now, they’re forgoing food once again in a last-ditch effort pressure the Senate to enact rules reform and pass the Freedom to Vote Act with a simple majority by January 17, Martin L. King, Jr. Day.

As I wrote last month:

The bill, an updated version of the For the People Act, would institute automatic and Election Day voter registration, make Election Day a federal holiday, and ban partisan gerrymandering, among other measures. It is a centerpiece of the Democratic agenda, but it has been stalled by Senate rules that effectively require a 60-vote supermajority to pass legislation.

I know what you’re thinking. If the bill has no realistic chance of passing—thanks to opposition to Senate rules reform from Sens. Kyrsten Sinema (D-Ariz.), Joe Manchin (D-W.Va,), and others—what’s the point in striking?

“It’s a desperate moment that we’re in, for sure,” said Shana Gallagher, co-founder and executive director of Un-PAC, the group leading the strike. “If that doesn’t work, then we hope that our hunger strike will grow so big that it can’t be ignored.”

The organization has already joined forces with a group of faith leaders and doubled its ranks of DC hunger strikers from 20 to 40. Gallagher said that more than 150 people from across the country joined a virtual organizing call last night—many of them inspired by TikTok—and that more than 100 have signed up to take part in the strike in D.C. if the vote fails.

“We’re not going to let this campaign fade into the night,” Gallagher said. “We really feel that this is an existential moment, so we are committed to continuing to strike until the bill passes.”

Pope Francis Is Right About My Profession