An Undersea Volcano Erupted Near Tonga, and the World Is Still Feeling the Aftereffects

by Russ Choma
in POLITICS 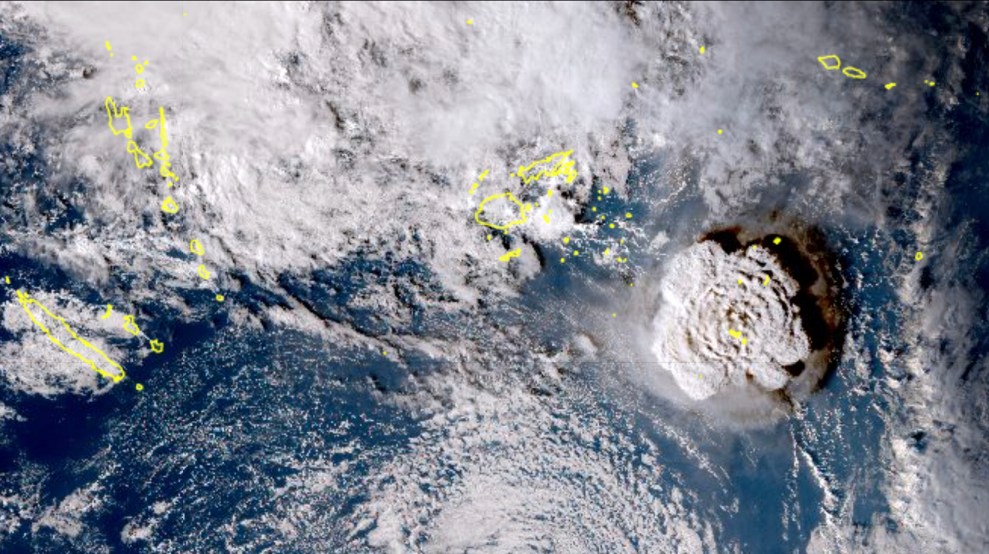 A massive underwater volcano erupted near Tonga on Saturday, sending shockwaves and tsunamis around the globe. The eruption, viewed from space by satellites flying over the region, was violent and enormous, with a smoke and ash plume rapidly expanding across the region. The airwaves created by the eruption are so powerful they can be clearly seen spreading out through the atmosphere on satellite imagery.

The volcano, known as Hunga Tonga-Hunga Ha’apai, is located about 40 miles away from Tonga’s main island of Tongatapu, about 3,100 miles southwest of Hawaii and 1,500 miles north of New Zealand. The sound of the eruption could be heard several hundred miles away in Fiji, and the eruption immediately triggered tsunami warnings on both sides of the Pacific.

Around 5pm today in Ravitaki village, Fiji. Capturing the sound of volcano eruption from Tonga

The internet and power has been cut in Tonga so little information is available on damage, but initial video showed a tsunami as big as four feet flooding onto the island.

Tsunami waves did come ashore on the United States’ West Coast on Sunday morning, although they were relatively minor.

Another huge surge in the back harbor. Bigger than the first one. #santacruz pic.twitter.com/gzzBmrq9dh

Scientists in New Zealand who have studied the volcano say that the type of ash and magma coming from the eruption is less toxic than other kinds, but predicted that the main Tongan island will likely be completely covered in a coating of ash. Some news reports described residents of the island having breathing problems.

The Pandemic Exposed Our Empathy Deficit

The Problem With the Genius Myth