by Clint Hendler
in POLITICS 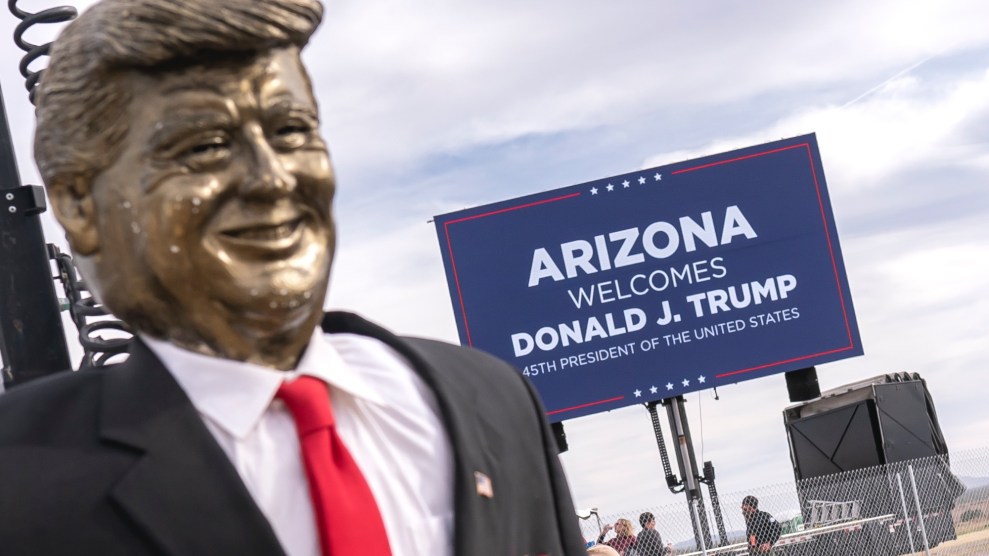 Donald Trump, the twice impeached ex-president who has never won a majority of Americans’ votes, held his first rally of 2022 last night in Florence, Arizona.

Trump used the occasion to spout nonsense about the 2020 election, falsely claiming it had been “rigged and stolen.” He heavily leaned on a tendentious investigation by a now-defunct organization handpicked by his allies in the state, falsely suggesting it had identified enough fraudulent ballots to have given him a win.

The golf-course owner and former reality TV host, who remains the Republican party’s most popular figure, was joined on stage by a variety of politicians who have endorsed the “big lie” that Trump won the last presidential election, including candidates for Arizona governor and secretary of state. According to reporting from the scene, the 15,000 person audience included supporters who believe he could retake the White House before January 2025, the next scheduled presidential inauguration.

The morning of the event, Steve Bannon, the president’s former campaign manager and senior advisor, explained that the rally was intended to put pressure on Arizona’s elected officials to “decertify” the state’s 2020 electoral votes—part of a nationwide campaign targeting other swing states where President Joe Biden narrowly won.

Bannon this morning says the purpose of the Trump rally in AZ today is to pressure the AZ legis to decertify the 2020 Biden electors, then PA, WI, and GA will follow suit and make Biden an illegitimate president in the minds of swing voters heading into the 2022 elections. pic.twitter.com/DOj4N8QyS9

This week, it emerged that the National Archives received formal submissions from GOP officials in seven states—among them, Arizona, Georgia, Michigan, and Pennsylvania—falsely claiming Trump won their electoral votes. News of the documents prompted calls, including from Michigan’s attorney general, for federal investigators to launch forgery or fraud inquiries.

While the Justice Department has launched hundreds of prosecutions targeting Trump supporters who engaged in acts of violence or illegally entered the Capitol during the January 6, 2021 riot, it has given no clear public indication that it is examining the actions of political figures who worked to create a false legal pretense to aid Trump’s efforts to hold on to power. Trump’s rally, the first of many he’s expected to hold in support of Republican candidates in the 2022 elections, is part of a plan to install allies in key positions ahead of a potential 2024 run—allies that could help him emerge on top, even if voters reject him once again.

Podcasts Are No Longer Private Conversations

‘No Money Could Bring Back the Dead’