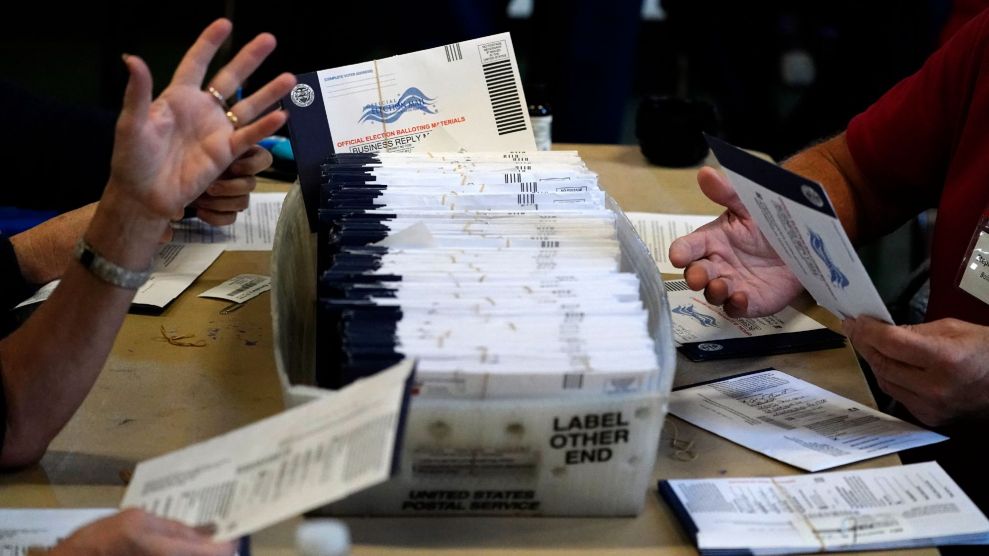 A Republican majority on a five-judge panel of Pennsylvania’s Commonwealth Court declared on Friday that the Keystone State’s widely used vote-by-mail system violates the state’s constitution—the latest fallout from Donald Trump’s endless campaign to undermine the US election system.

Back in 2019, Pennsylvania’s GOP-controlled state legislature passed Act 77, which made mail-in voting universally available. For awhile, that reform enjoyed bipartisan support. Before Gov. Tom Wolfe, a Democrat, signed the measure into law, Pennsylvania Senate Majority Leader Jake Corman, a Republican, praised Act 77 as a worthy “modernization” of the election code. But as Trump repeatedly and falsely asserted throughout 2020 that mail-in voting—which was becoming increasingly popular among Democrats and independents worried about Covid—enabled voter fraud, Republicans began to change their minds.

After Joe Biden won Pennsylvania in November 2020 on the strength of massive mail-in vote turnout, Republicans filed suit in state court, absurdly arguing that 2.6 million mail-in votes cast in the election should be invalidated. It briefly seemed that a Republican judge might take those arguments seriously, but the state Supreme Court quickly stepped in, unanimously tossing out the Republican lawsuit, which, the justices pointed out, hadn’t even been filed until after millions of Pennsylvanians had already cast their ballots. The Trump campaign attempted to get the US Supreme Court to overturn that decision—Ted Cruz even offered to argue the case—but SCOTUS wasn’t interested.

Republican efforts to overturn the 2020 election may have been thwarted, but their war on mail-in voting shows no signs of abating. GOP state representatives soon filed an amended petition arguing that Act 77 is unconstitutional. And today, the Republican majority on the Commonwealth Court, a lower court, announced that it agreed with that petition and struck down the law.

Trump immediately voiced his delight with the ruling in a statement. “Big news out of Pennsylvania, great patriotic spirit is developing at a level that nobody thought possible,” he said.

However, the ruling might be short lived. The Pennsylvania Department of State issued a statement saying that it plans to appeal the case to the state Supreme Court, which has a 5-to-2 Democratic majority. And while the outcome remains to be seen, the judges on Pennsylvania Supreme Court have proven sympathetic to mail-in voting in the past.

What If the Department of Homeland Security Was Aimed at the Nation It Was Created to Protect?

The Atlantic Daily: The Decisive Moment for the War in Ukraine